This project begins with a simple question: What sounds are important, even though we don’t actively listen to them? As a performing musician, and employee of a music venue, it occurred to me that many aspects of a live music performance go largely unnoticed by the listener, and often the performers themselves. There is the creak of chairs, rustle of clothes, clank of utensils, murmur of voices, and occasional cough or clearing of the throat that emanates from the audience. The muffled sound of road noise, constant hum of the HVAC system, closing of doors, opening of the cash register, hurried activity in the kitchen—all provide the context that largely distinguishes a live musical performance from a controlled studio recording. Stage talk exists in much the same way. As the direct line of communication between performer and audience, stage talk is no more a part of the music than the background noise of the venue, but without it, the performance would lack much of its context and meaning. For the purpose of this project, exploring soundscapes in and around Johnson City, I chose to isolate stage talk, and consider how a small sampling of musicians handle this under-appreciated aspect of live performance. 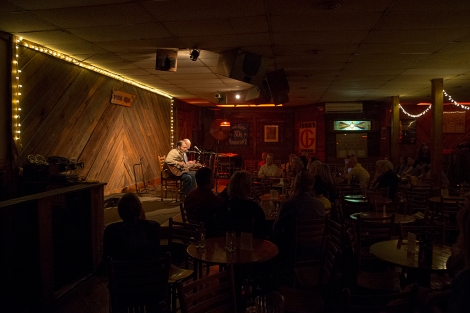 Just west of downtown Johnson City, at the intersection of W. Main St. and W. Watauga Ave., The Down Home has been a regional epicenter of Americana music for forty years, hosting the likes of Doc Watson, Townes Van Zandt, Willie Dixon, and Lyle Lovett, among many others, over its long history. Marketing itself as a “listening room,” The Down Home is a small venue, seating approximately 150 people at maximum capacity. Wood floors and wood paneling, combined with low ceilings and a small stage, create an intimate performance space, where sound reinforcement almost feels unnecessary. There is a small bar in the corner of the room, and beyond that, a kitchen, preparing various Tex-Mex dishes. Wooden tables and chairs line the main floor, with an elevated line of booths against the wall opposite the stage. On Friday, April 14, 2017, at 8:00 pm, a crowd of roughly seventy people filled the venue to watch Jared Tyler and Malcolm Holcombe.

Twenty-five miles northeast of The Down Home, and just a couple blocks over the Virginia state line, the Birthplace of Country Music Museum celebrates the history of country music in and around Bristol, Tennessee-Virginia. The museum houses its own radio station, WBCM Radio Bristol, which regularly broadcasts live music performances from its 100-seat theater. With modern construction, dark-painted walls, elevated seating, and studio lighting, the theater is refined, but even more compact than The Down Home. On Saturday, April 8, 2017, at 7:00 pm, approximately forty people took their seats to watch the Western Centuries.

On the grounds of the state capitol complex in Charleston, West Virginia, the Culture Center Theater seats 468 people, with a main floor and balcony. The decor is fairly subdued, but the theater presents well, and hosts such notable events as Mountain Stage with Larry Groce. A small crowd of about 60 people sat down on Saturday, February 18, 2017, at 8:00 pm, to watch East Tennessee State University’s Bluegrass Pride Band perform as part of a concert series sponsored by the Kanawha Valley Friends of Old Time Music and Dance organization.

Most of the technical issues involved in this project surrounded the recordings themselves. My strategy was to record entire concerts, and later transcribe the stage talk, or banter in-between songs. Due to limitations of equipment and access, I placed the recorder in the audience, rather than draw a line from the soundboard. While this was effective in recording stage talk, as heard by the audience, it also picked up crowd noise, which makes it difficult to present isolated, clean recordings. The other major issue with the recordings was trying to decipher everything the performer was saying. In cases where a particular word or phrase was not clear, I used the word “inaudible” in brackets throughout my transcriptions.

From a theoretical standpoint, this study might fall under discourse analysis, but for the purposes of this project, I am approaching it within the framework of Appalachian Studies and Ethnomusicology. The methodology almost exclusively involves qualitative research, though for entertainment purposes only, an internet-generated word cloud (see Figure 1) is included, which may be seen as quantitative research, as it attempts to assign value to words based on the frequency with which they were used.

A couple of ethical issues should also be addressed. For one, each of these performances were public, and two of three were made available via live broadcast to a global audience. Therefore, permission to record for this purpose was not required, and anything contained within the transcripts can be considered public record. However, isolating the stage talk removes it from its original context, and subjects it to the possibility of human error through the process of transcription. This should be carefully considered before drawing conclusions from the transcriptions or audio recordings.

Finally, while the scope of this project was originally intended to be a study of Johnson City soundscapes, I am presenting data from a wider area. In order to reconcile this, I’ve identified a few common threads that tie each location together. For one, Johnson City (The Down Home) and Bristol (Birthplace of Country Music Museum) are each part of the Tri-Cities Combined Statistical Area, and could be considered part of the same musical community. Charleston (Culture Center Theater), while significantly farther away, shares the distinction of being a metropolitan area within the Appalachian region, and in this case, a Johnson City-based band is featured. One last point to consider is that each performance’s host occupies a significant place in their local and regional music communities. The Down Home has been integral to the Johnson City music scene for four decades; The Birthplace of Country Music Museum is part of an organization that has long worked to establish Bristol as the “Birthplace of Country Music;” and Friends of Old Time Music and Dance plays a critical role in keeping traditional arts visible in West Virginia.

As a way of processing and analyzing stage talk, I relied heavily on an article published in Ethnomusicology by John Bealle, entitled “Self-Involvement in Musical Performance: Stage Talk and Interpretive Control at a Bluegrass Festival.” Bealle is one of the only sources of significant research and analysis of stage talk, especially within bluegrass and country music. By considering the issues he focused on, and the points he made, I was better equipped to analyze the stage talk I had recorded. This project builds upon Bealle’s work, with an emphasis on contemporary performances, and a broader sense of genre. In this case, I’m dealing with a bluegrass band (ETSU Bluegrass Pride Band), a neo-traditional country band (Western Centuries), and two folk-country singer-songwriters (Jared Tyler and Malcolm Holcombe), all of which might be housed under the problematic catch-all, “Americana.”

Any number of issues could be highlighted and discussed within these performances. For those looking to read further, links to full PDF transcriptions will be included with this article. Due to limitations of time and space, I’ve chosen to focus on two general themes: place and authenticity.

Place is at the core of this project, which is meant to survey soundscapes in and around Johnson City. As an aside, I’ve included a Google Map (see Figure 2), which shows all of the places referenced over the course of these performances. Indeed, reference to place is heavily involved in stage talk, and one of the accompanying sound files is an edited compilation of various clips relating to place. The most common use of place is heard in personal introductions; every band member is identified by place, nearly as often as by name. The claimed origin of every performer is mentioned at least once over the course of these recordings. Another aspect of place relates to the venue or locale. In these recordings, only The Down Home is singled out by performers as a venue: “So good to be back here at The Down Home. I’ve always felt right at home, right here” (4). In Bristol, it’s the host who makes special effort to emphasize the locale: “Country music was born right here in the mountains, in Bristol, Tennessee-Virginia” (5). In some cases, it’s what isn’t said that’s noteworthy. The ETSU Bluegrass Pride Band makes no specific reference to the venue or locale, except to say, “This is a nice area. I don’t get to see this part of the state very often” (3). As seen in the above reference to Bristol, value is also attached to place. One such example, from Jared Tyler, associates his childhood home of Oklahoma with Midwestern values and a sense of nostalgia: “[Grandma Lilly] had the absolute best compost pile you ever did see. At least in Oklahoma. And the biggest worms you ever did see as well. She taught me how to fish, and she taught me how to cook, and she taught me how to clean” (4).

In many ways, such as personal background or local history, authenticity is an extension of place. I was inspired to consider issues relating to authenticity by Richard A. Peterson’s excellent book on the subject, Creating Country Music: Fabricating Authenticity (2). Radio Bristol host Nathan Sykes indirectly promotes the authenticity of Bristol and the Western Centuries by characterizing Bristol as the birthplace of country music, and by marking the Western Centuries as the evolution of a long history of west coast country music, from Buck Owens to the Flying Burrito Brothers (5). Another way authenticity is being established is through endorsements. Malcolm Holcombe, who is a widely respected songwriter, is helping to establish Jared Tyler’s perceived authenticity by endorsing his album: “So I want y’all to be sure and pickup one of his records there, man, because it’s a damn good record, and I ain’t kiddin’ you. Now I don’t sell nothin’, I hate sellin’…” (4). Holcombe also reinforces his own authenticity by pointing out that he’s not a salesman, and doesn’t recommend just anything. Finally, another brush with authenticity comes through the identification of original material, which is generally emphasized as much as possible. Interestingly, Holcombe makes little reference to his work being original, partly because it’s assumed by the audience, and as the previous quote shows, he’s unlikely to overly self-promote himself. For younger, or lesser-known performers, highlighting original material is a key selling point. This is seen consistently throughout the performances by the Western Centuries and ETSU Bluegrass Pride Band where original material is involved (3)(5).

Place and authenticity are just two of many themes that can be drawn from the study of stage talk, which is an under-explored area of discourse analysis. Within Appalachian Studies, it’s particularly interesting to consider the ways performers represent the region and associate with the region in this public form of discourse. In terms of Ethnomusicology, further research could identify stage talk tendencies within certain genres, or musical cultures.

In any case, stage talk is an important part of the soundscape of a music venue, a town, and a region, worthy of greater consideration. 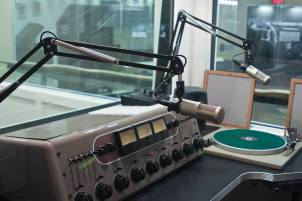 Sound file of a soundscape. 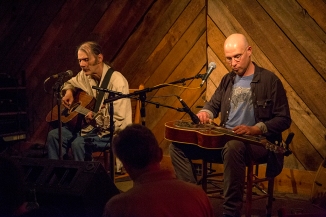 Malcolm Holcombe on stage at the Down Home, Johnson City, TN 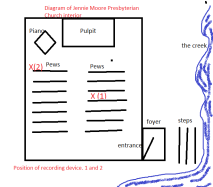